2015 Christmas at the Manor 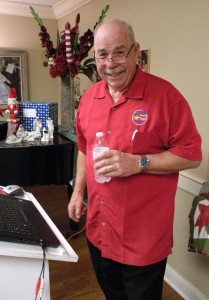 I would like to start off by saying thank you to all the members of the OD Shag Club who came out and participated in this special evening. The residents of the Manor, and there were many in attendance, were so thoroughly entertained that by nights end everyone was still in their seats.

The night started off with the OD Shag Club Dance Team, doing a couple of group dances. Linda Campbell, Lou Martino and Lenny Gardner then entertained the residents with a three-person dance. Lenny told a few jokes. The woman of the Club then proceeded to give out the brooches that the club provided. Cookies and punch were distributed while the brooches were pined on the lady residents. The party continued as yours truly cranked up the music and we danced with most the residents.

Paul Craver arrived and entertained the residents with two beautiful songs “Make the World Go Away”, and “White Christmas”. As Paul sang these songs he worked the room looking into the faces and holding hands with many the lady residents, he certainly made them feel special. Thank you Paul.

Linda Campbell and Lou Martino, who dressed as toy soldiers, came out and proceeded to march up and down the room, than stood at attention as Santa (Bob Sanders) made his entrance. Santa personally greeted each and every resident as the members of the club were distributing the presents.

We were than entertained by Sheila and Bill Blazer, who are participants in the 2016 National Shag Championship. Sheila and Bill gave us a preview of their dance routine for the Nationals and the residents were in complete awe.

The members, along with Santa than danced and sang with the residents, we had a group sing-a-long and we closed with everyone singing “GOD BLESS AMERICA”

All in all it was a very good evening both for the residents of the Manor as well as the members of the club.

A special thank you goes to Jon Harris, our Master of ceremony for the evening.

Until next year, this is Joe Ferlauto, your Myrtle Beach Manor Chair, saying thank you and may each and every one of you have a very Merry Christmas and a happy and healthy New Year.