Well, everyone. This is my last letter to you as your 2022 President. It has been a ride to say the least. I can retire from this as of December 31 and know that I have done my absolute best. I have devoted this entire year to the OD Shag Club to try to make it the best it can be. Do I feel like that has happened? No, I really do not. There have been a lot of things beyond my control, but I tried very hard to involve our members and show them what this wonderful dance community is like. I felt like we gave them every opportunity to feel important and useful and to showcase their many valuable talents. I have laid awake at nights to try to come up with things that will make our members feel welcome and I do believe that for the most part that was accomplished. Could we do that with everyone? No. When you have 670+ members it is hard to know every face much less names. Please know if you were or are new, you are welcome and you need to help us by making yourself known. I will still see you at FH at least 2 times a week. Please do make yourself known. I am also going to stay involved with the entertainment, the parades, the Blues Cruise, and the beach parties so please help me by introducing yourself and volunteering to help. If you have been around for a while, please continue to say hello. I am also going to help out with another local club so you may also see us there.

December not only “changes the guard” as they say but it also brought a very busy month to your board. As most of you know, your board voted to not be in the Christmas parade due to the cost of their new rules. We also had to withdraw from our clean sweep job as the State of SC also changed some road requirements that did not work with our membership. So, even though we did not participate in either of those things, we still had a busy month. Our Thanksgiving party in November was attended by 256 people. Our December party was attended by 250+ (uncertain of exact number). Those 2 events were so well attended and for both of them our food was absolutely delicious. OUR SPOTLIGHTS: Thank you, Terry, Kathy, Paulette and all who volunteered to serve. Thank you for those that make themselves available to clean up. You are awesome and the rest of us could not do it without you. Thank you to Connie and Charlie Pangburn for the November has closed out another month. One more and it will be another year. November brought us Thanksgiving and what a Thanksgiving Party we had. This year has flown by for us and when talking to others it seems as though most feel that way. You know what they say, time flies when you are having fun.

Fat Harold’s looked so good. Lulu has told me multiple times that it is the most beautiful it has ever been. So good to hear. It took 8 of us around 5 hours to make it sparkle. Terry and Kathy at the helm again for all of us to enjoy.

Our Thanksgiving party was so well attended. We had 256 people and got them all fed thanks to Terry, Kathy, Paulette and all our serving volunteers. A big thanks to all. I would appreciate it if you will say Thank You to all our food volunteers and clean up crews. It is so nice to have people like them in our mist.

We are making the three of our food leaders Terry and Kathy McCoy and Paulette Miller our Spotlights for November. What most of us do not think about is that there is so much that goes on behind the scenes. Not only do they cook and serve but they have to not only buy the stuff, they have to pick up all things necessary and then cut up all the necessary ingredients beforehand. Then they have to clean it all up. It takes a team. Then it takes the leader of the team. I think it is time for us to all think about what it takes to have something as great as we had at Thanksgiving. Just so everyone also knows Paulette Miller made all of the delicious dressing. I don’t think we can ever thank them enough for what they do for us.

Before you know it Christmas will be upon us. Be sure to get your shopping done early to avoid the crowds. No matter how much online shopping people do, there seems to still be a crowd. Whatever you do, please be safe.

This season of the year brings us all to a very busy time of the year. There are so many in need and the OD Shag Club will be asking you to help us feed and give to families that struggle all the time for the things that we take for granted. Remember when you come to the Christmas party on December 10th to bring what you can of non-perishable goods or donations or if you feel like it both with you to the party. Hopefully, those of us who are so lucky in life will share with those less fortunate.

Thanks to all who are helping the OD Shag Club with its charities.

Remember, be kind, love one another and treat each other with respect, have fun and above all dance like no one is watching. It is with you feet that you move but your heart that you dance.

Merry Christmas and Happy New Year to all. On December 10, 2022, the OD Shag Club put on it’s annual Christmas Party/Fund and Food raiser at Fat Harold’s. What a night for the large crowd who were lucky enough to join us. Wearing their best Christmas party duds 250+ came to celebrate and do what they could to support our Christmas Family giving tradition. We danced, we ate a delicious meal provided by our caterer chosen by the exceptional team of Terry and Kathy McCoy and Paulette Miller. Our celebration meal was so good, and we had so many people we had to give out 2 extra colored tickets in addition to our regular 3. It was quite the feast and quite a wonderful night. Our group of Christmas elves dancers graced us with another of their elf dances to the delight of the crowd.

Given the generosity of our members and guest, we were able to provide our 5 Christmas families with Santa’s wish list, gifts, toys including several bikes and food galore. On Sunday morning some of your board members

assembled at the President’s home to divide all the food collected. Connie Pangburn, Linda Campbell and Donna Williams continued their day grocery shopping for the families with the money collected. Wow, what a haul and really fun. On Monday morning, your President and several board members happily delivered all the truck load of stuff to the school.

Thank you, OD Shag Club, to all who donated, and the Board members who separated and who delivered. It is an exceptionally good feeling to be a part of this major undertaking. Merry Christmas to all. 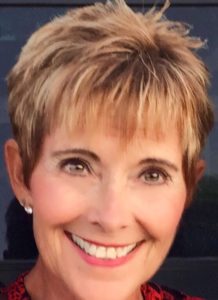 My name is Linda Benfield Campbell.  I currently reside in Longs, SC after relocating here from Columbia SC in 2010.  I am originally from Statesville, NC and have been employed with Aflac as a Sales Associate for over 20 years. While working with Aflac, I have held several positions including: State Training Coordinator for NC, SC, and Florida, District Sales Coordinator in NC, SC, and Florida and Training Manager at Aflac’s World-Wide Headquarters in Columbus, Ga.

I began shag dancing with my Twin Sister, Brenda, in Statesville, NC in 1996. While in Statesville I was a member of several shag clubs, and I held numerous positions within the Statesville Shag Club including Secretary, Vice President. I also chaired the Entertainment/Decorating and Ways and Means committees.  In September of 2001, I won the Rookies Revenge Contest during SOS with Larry Davis.

I have been a member of the OD Shag club for over 10 years. I have held several positions with the OD Shag Club and am currently the Advertising Chair.  In 2018 I was the Club President, 2017 Vice- President.  In 2015 I was elected to the 2016 Executive Board.  I was the Entertainment/Decorating Co-Chair for 2 years (2011-2012), Co- Chaired the Vacation Giveaway Fundraiser 2013 and Chaired the 2014 Golf Cart Fundraiser.  In 2012, Lou Martino and I founded the ODSC Dance Demo Team that has grown to over 20 members. We demonstrate the shag to nursing homes/assisted living homes in the community, conventions, weddings and just about anywhere we can showcase the dance. Since being a member, I have volunteered for many of the events of The ODSC including participating in parades, golf tournaments, ways and means, and serving at the Brunches and our parties, etc.

I do love to dance but more importantly I love to promote and preserve the dance. I dance at least 2 nights a week at Fat Harold’s (at least PRE-COVID). During this time, I am either dancing or enjoy talking about my love for the dance, by getting others involved in the dance and our ODSC club.

As a board member, I ask for your support. I wish to continue to strive to better our club by being your “voice” and listening to you as a membership and dedicate my time and my support in making sure that we are one club that is community minded, preserving the dance we all love and most importantly striving to bring together everyone to become a wonderful shag family. What a wonderful time everyone had at the Myrtle Beach Manor on Monday night! The OD Shag Club entertained over 30 residents of the Manor with singing, dancing and gifts. Such a humbling experience to talk and laugh with the residents and see them having fun. Thank you, Charlie and Connie for leading the event and the dancing, Bill for being the DJ, all the elves for their costumes and dancing, and Bernie for taking pictures. Thank you shag club members for participating in the event. Connie the “chicken dance” was a hit! One resident asked if Jim Robinson was part “Chicken.” Beautiful poinsettias and gift bags were given out to the residents at the conclusion. If you haven’t attended this event plan for next year! It was great.

August 23, 2022 we started something different for our new members and all our beach diehards. We had our 1st Dance Barefoot in the Sand Beach Party. With permission from the city and our great supporters Jessica and Harold Whorley providing the electricity for us, we started at 5pm behind the OD Pavilion. JJ Kinlaw set up his outside studio and provided 100+ people with the great music we needed to be able to accomplish what we set out to do. We had a terrific turnout, great weather, great music, great camaraderie and so much laughter and fun we completed our 1st of what we hope is many dancing barefoot in the sand events. Based on all the wonderful laughter, eager participation, so many compliments, and so many requests for another we are looking forward to another great night on September 13, 2022. What a wonderful tradition to start.