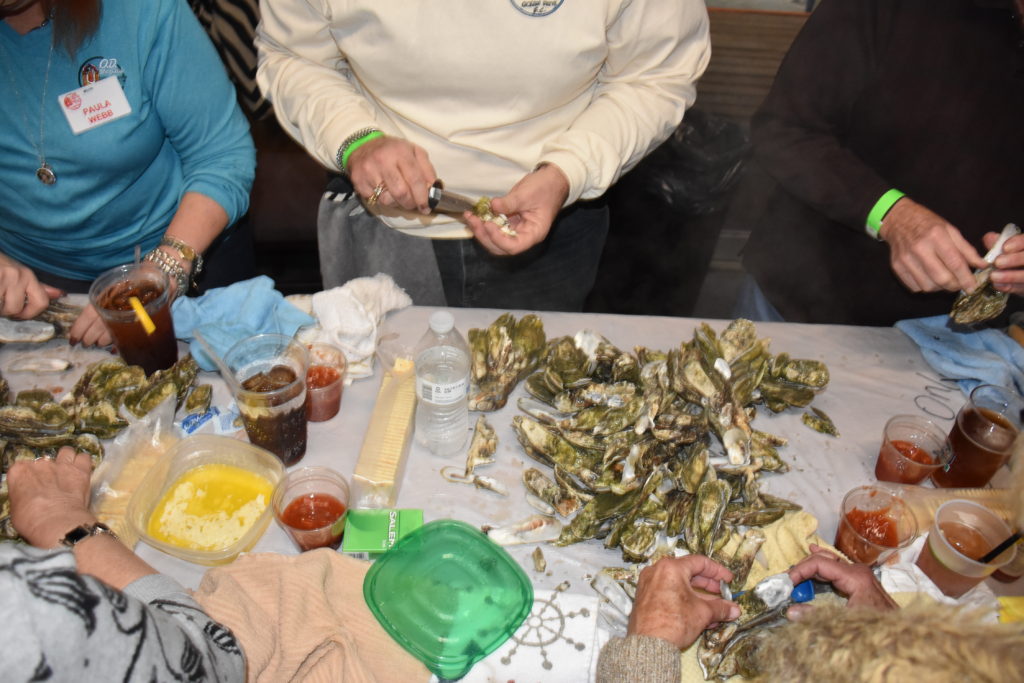 A lot of people do not know the hard work AND the number of the people it takes to put together a successful oyster roast.  And that’s the key: SUCCESSFUL!  But, Donnie and Wendy Shultz Do! And this year was no exception.

It began the night before at Donnie and Wendy’s house and it began with CHICKEN!  Yep!  Chicken, for their world-famous Chicken Bog (yes, for those who just haven’t acquired the love or taste for oysters).  And for those of us who love both.  Thank you, Cindy Day and Dolly McDermott, for serving this and making sure that each table had their crackers and cocktail sauce.

I am sure you couldn’t miss our “sailor in the crow’s nest”, Dickey Garrenton on the ladder, directing where the oyster carriers needed to go and I don’t believe anyone was without oysters for more than just a little bit as Donnie and his great “crew” kept ‘em coming!

While everyone ate either oysters or chicken bog, Bill Anderson kept the great tunes spinning and even some of the members took a break from eating to show their stuff on the dance floor.  Of course, Bill had to throw in a couple line dances for the ladies (and men).

Billy Powell and Cathy Jamiolkowski did a great job selling 50/50 tickets and the winner of the 50/50 Charles Neal walked away with $449.  Name Tag winner of $20 was Betty Bennett and Logo Winner of $20 was Debby Robbe.

At the end of the night there was lots of help from many of the members including the Executive board and their spouses to put the OD Arcade back to its original state.

2018 World Famous OD Shag Club Oyster Roast will go down as a wonderful success and we will look forward to it again next year.  Thank you again to EVERYONE FOR A GREAT JOB WELL DONE!