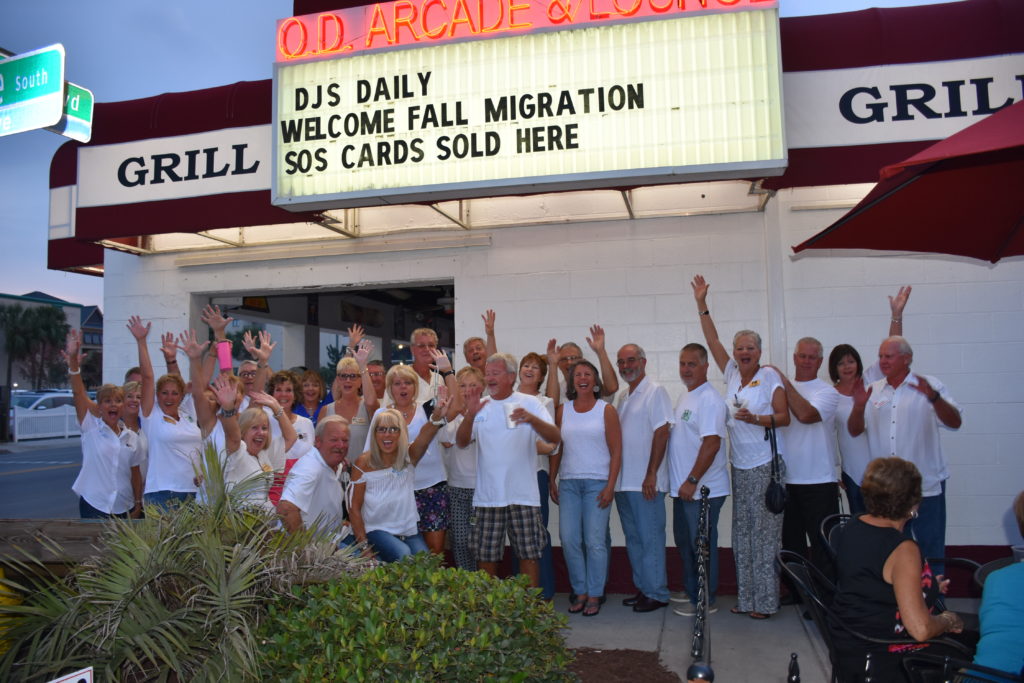 On Tuesday, September 19th of SOS, 40 plus members of the OD Shag Club proudly put on their red shirts/blouses and met at Pirates Cove to begin one of two nights of our Annual Bar and Social Crawl.  It was very evident that the OD Shag Club was in the club with visions of red everywhere.  Everyone was getting their adult beverages/drinks and socializing with each other and even with other members of other clubs who where their to enjoy the DJ and the music that was playing.  Many of the club members took to the floor to enjoy the great music that he was playing to keep the energy of SOS going.  After a group picture (a sea of red, I must say), we began to make our way out of Pirates Cove to our next destination, Duck’s.   We were a rowdy group as we headed up the sidewalk to Ducks.  Each one made their way up the sidewalk and acknowledged Tommy and Christina Black who was playing outside, as we entered Ducks Too.  It was also evident that the OD Shag Club was also in the house at Ducks.  Moving the paaarrty up to the Main Ducks, Paul Craver announced that the OD Shag Club was in the house and a great roar was heard around the club.  Again, all socialized, danced to the fantastic music of  Paul Craver.

On Thursday, September 21, 2017, the OD Shag Club had its second night of its Annual Bar and Social Crawl by beginning the night at the OD Arcade.  Some 35 plus members dressed in white this night, attended and enjoyed the spirits, and the dancing.  On queue, we all gathered and left to our next destination, our host club, Fat Harold’s.  We were very excited and quite loud as we walked up the side walk (and we even lost a few members to the Music on Main concert) and crossed the street over to Fat Harold’s.  Waiting at the door to greet us was our own favorite Bartender, Shannon Briggs.  Of course, entering was no quiet matter as the OD Shag Club entered the club.  Of course a fun time, dancing, socializing and enjoying the great music was had by all.

We all look forward to next year as we meet again and enjoy this fun event.