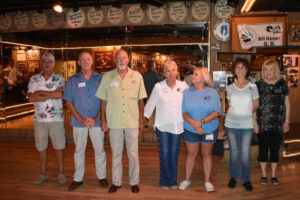 The August 2020 meeting of the Shag Club was held on Saturday the 21st at Fat Harold’s with 116 members and 2 guests in attendance.  The meeting was called to order by the President, John Setzer and invocation was by Wayne Baldwin. The menu for the meeting was a Fish Fry prepared by Terry McCoy and his crew, and after a bit of a rocky start, they were able to provide a great meal as always.  Food service was provided by Paulette Miller and her helpers, which went very smoothly.  Thanks to Terry and Paulette for heading this up.

The August meeting was also our Nominations meeting for Board Members for the 2022 Elections to be held in October.  Joe Harrill, Chairman of the Committee, presented the names for the ballot solicited by the Committee,

Board of Directors (2 positions open)

Nominations were then opened to the floor and the following names were added to the ballot for Board of Directors,

The “New Member Bingo”, presented for the 1st time by Lori Setzer and the Entertainment Committee, was well received and enjoyed by the membership

As the meeting drew to a close the awards and drawings were held.

Looking forward to seeing everyone in September.