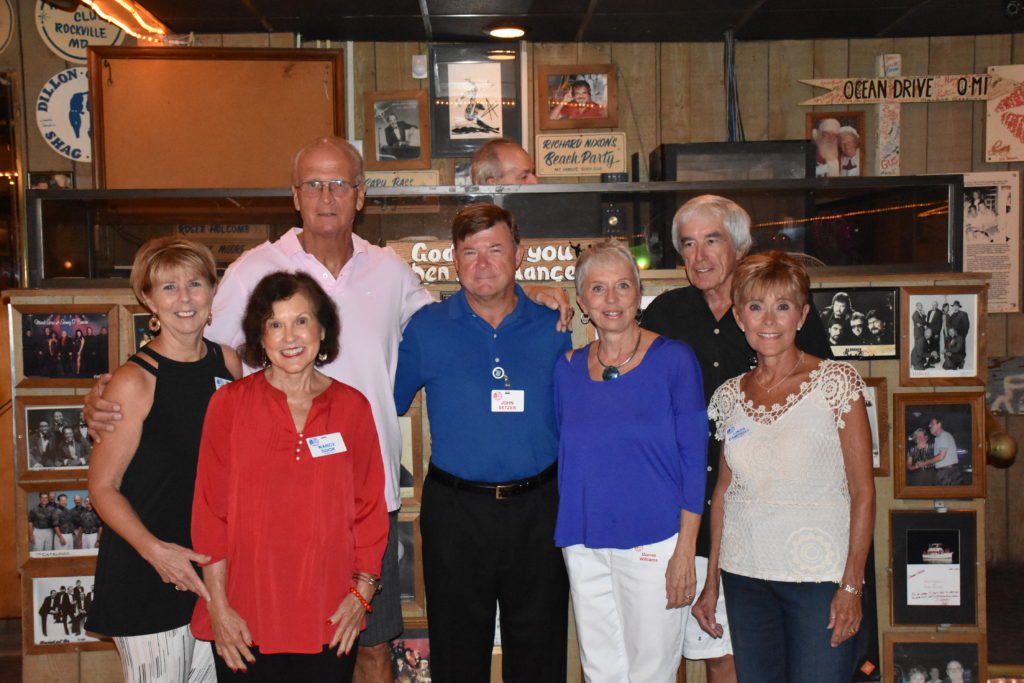 At Fat Harold’s, August 19th, 2017, our great Hospitality Team began greeting each and every one of our OD Shag Club members and their guests for our Nominations Party.  Out in the parking lot to the side, one could see the busyness of members preparing our Bar-b-que for the dinner to be served for the night.

Gary Bass was in the DJ booth playing tunes to get the crowd up and on their feet. Shagging to the oldies, the new hits we hear on Wednesday and Fridays, and of course, all the favorites that we love to dance to.

The party began right at 6:00pm with President Terry McCoy welcoming everyone and making some announcements.  He then turned the microphone over to Nominations Chair Vic Gillespie who announced the nominations for the 2018 Board of the OD Shag Club.  Those running are:  Board of Directors:  John Seltzer, Al Grosgrove, Nancy Sook and Jerry Howard.  Treasurer:  Vicky Parsons, Secretary: Donna Williams, Vice President: Bill Bacon and for President: Linda Campbell.

Congratulations to Vicky, Donna, Bill and Linda who will run unopposed and will be the officers for 2018.

After the nominations were announced everyone was excited to get their food card called so they could sink their teeth into some wonderful Bar-b-que and all the fixin’s.  Thank you to Faye Chowning, Donnie and Wendy Shultz, Jim and Wanda Queen, Susan and Kevin Harrell, Bill Bacon, Terry McCoy, Tim and Cassy Shumway and Cindy Day  for the MAGNIFICIENT job that you guys did in cooking, and transporting, preparing and getting servers for the Bar-b-que.  Everything was delicious!!! We even got to buy what was left to take home for later!  Yumm!!

Drawings were held before the night ended for the nametag and logo and those lucky winners were Sandy Ramseur and Linda Campbell.  I believe there is still a question as to the winner of the 50/50 as to whether it was Mama Vicky Harrison and Wanda Queen or was it Paul Harrison…Story to come later! Ha!

Gary Bass also presented back to the club his monies that we pay him to play.  Aww! Thank you Gary…we do appreciate YOU!!

One could say that we had a great night of food, fellowship, and dance and look forward to the upcoming SOS and the Elections party in October to vote on the rest of the Board of Directors who will continue to move this ODSC forward as the BEST SHAG CLUB EVER!