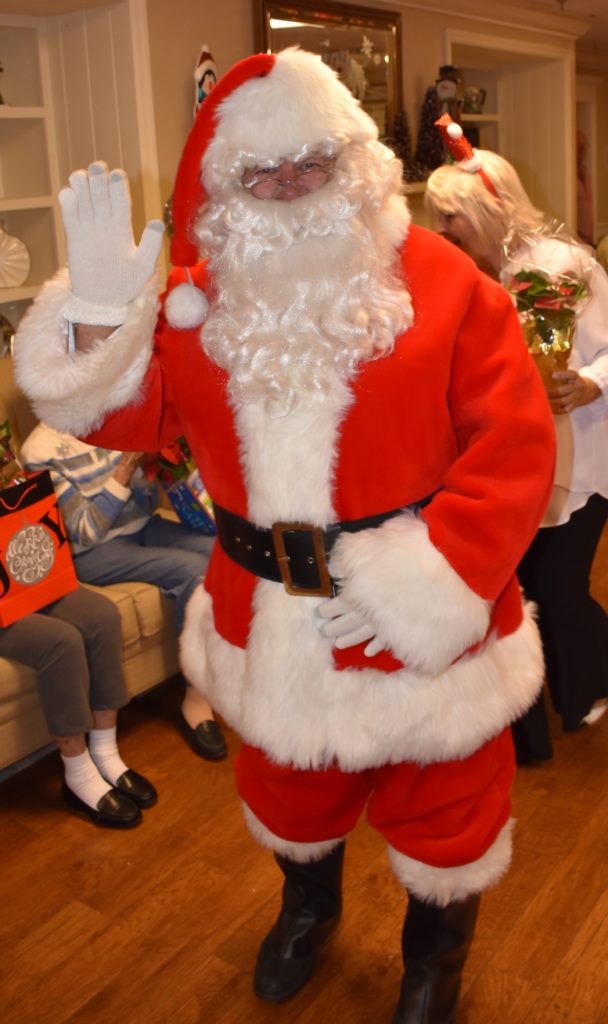 On Monday, December 4, 2017, OD Shag Club members started arriving at the Myrtle Beach Manor around 5:30pm excited for our Annual Christmas party for the residents. We ALWAYS look forward to this event each year.

Joe Ferlauto had a full agenda planned from 6:00pm-8:00pm. The evening began with Emcee John Harris introducing four of our own Junior Shaggers to dance. All the songs that were to be danced were Chrismas Shag Songs. WOW! Those Juniors could really “let it go” and showed us some of their fancy moves.

Next, were the members of the OD Shag Club Dance Team and they filled the floor dancing to “Santa Meet Me with Your Red Suit On” and “Rockin Santa Man”. They showed their fancy footwork also which was quite impressive, since the youngest member is around 60 and the olders at 96. Way to go Dance Team!!

Again, this year, the three “L’s” in this case for this event, the three “Elves”, Linda Campbell, Lenny Gardner, and Lou Martino did their trio dance, which is always entertaining.

Showcasing their dancing skills and talents were Mike and Bonnie Bejzak to the tune of “Call Me Claus”. They were great especially since Mike had just had double knee replacement less than six months ago. Great job Mike and Bonnie!

Next came our favorite part of the show, where the women of our club put beautiful Christmas pins on the lady residents of the manor, as the members of the club distribute punch and cookies to the music of traditional Christmas carols being played in the background by Chair Joe Ferlauto.

The smiles on the faces of all the residents began to light up the room and one could tell that they were having a wonderful time.

Our favorite joke teller, Lenny Gardner, shared some of his humor by telling a few jokes keeping the residents and members laughing along with him.

Always a favorite Paul Craver came and sang several songs, including his Mother’s favorite song “Make the world go away” and each resident enjoyed listening to them all. The dancing continued with Bill and Sheila Seymour, National Dance constestants, dancing again this year to a favorite Shag song “Cant Take the Pressure”. As in the past, Great job Bill and Sheila!

All of a sudden, we were taken back in time to the Theme Song of the Mickey Mouse Club announcing the entrance of the lovable Mickey and Minnie Mouse (aka Lou Martino and Linda Campbell). Mickey and Minnie began mingling with the residents as they sang traditional Christmas carols such as “Frosty” and “Rudolph”.

But, WAIT, WHAT to our wandering eyes should appear? But a jolly old man, with round little belly that shook when he laughed like a bowl for of jelly…. YEP it was SANTA CLAUSE and his little helper Christmas Carol!

As Santa waived and heard the wishes of the residents, the members of the club passed out beautiful poinsettias for each resident’s room. What a delight it was to watch them with Santa and Christmas Carol.

Thank you to all of the OD Shag Club members who all dressed up in their festive attire and accessories. But most of all our gratefulness to Joe Ferlauto, Chairperson, who worked so hard to prepare this wonderful event.

I close with these words, which reflect the whole evening: “May this Christmas season bring you special moments and Happy memories and always BELIEVE in the MAGIC of Christmas!”