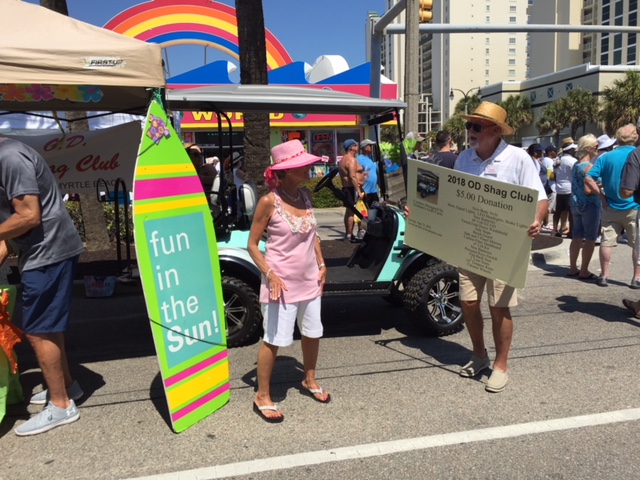 Click here to see Photos of the Golf Sales

A very big thank you to all of you who worked the Golf Cart Booth at Mayfest May 12, 2018. We sold a total of 449 tickets worth $2,245.  Everybody did such a great job.  The heat and Taylor Dane did not get the best of you.  That being said, kudos need to go out to our 4:00-6:00 pm group.  One and a half hours of their selling time was while she was up on the stage (screeching), and another half hour during booth tear-down, and they still sold almost 70 tickets.

There were a few questions regarding our sales recap.  In the end, we came in right on the money.  We did have one lady (retired veteran on a walker) who only had 4 dollars. We used donation money to cover the $1 so that she could buy a ticket.  Even our North Myrtle Beaches finest bought a ticket.

Filling the time slots for today were more difficult than for SOS but you guys came through for us.   Your help is greatly appreciated.

Once again, thank you. 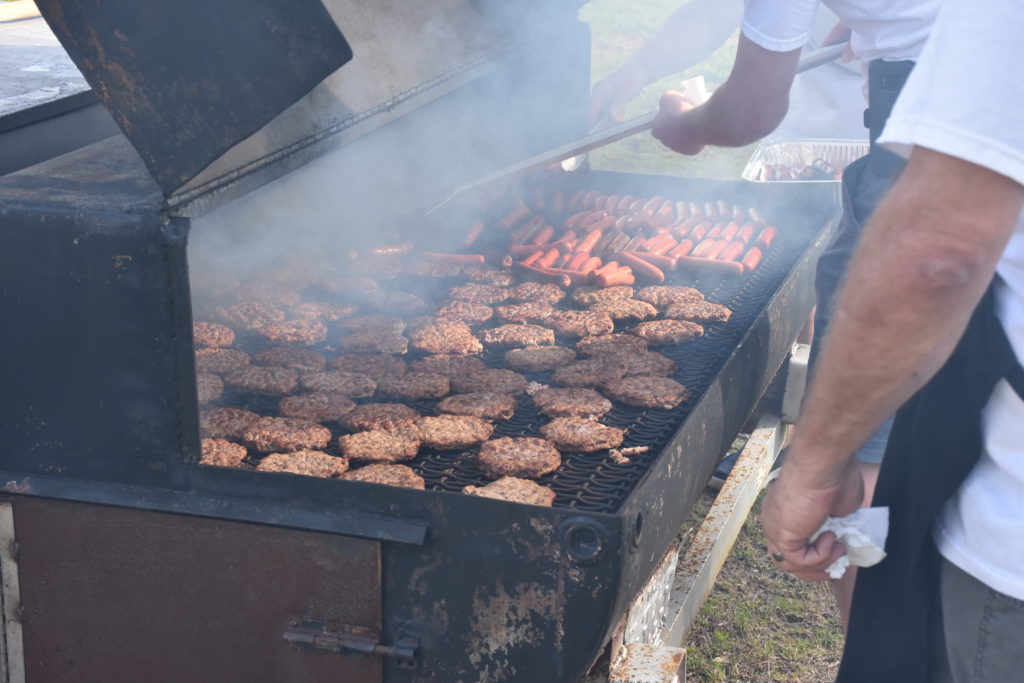 This past Saturday, May 26, was the rescheduled date for the Annual OD Shag Club Cookout at Savilles on 2nd. It was a beautiful day full of sunshine and everyone looking forward to being outside. Corn hole sign ups began around 3:30pm with the tournament beginning at 4:00pm. Also, beginning around that time, the smell of charcoal was in the air as Donnie and Wendy Schultz and their mighty crew began the cooking of the hot dogs and hamburgers for over 192 members present to enjoy the spread. Delicious desserts were set up inside that were prepared and brought by the members.

President Linda Campbell gave announcements and the winners of the Corn hole tournament.

Special trophies made by Wendy Schultz were presented to the winners along with a cash prize for a bar tab at Savilles on 2nd.

DJ Milton White kept the floor full for all those inside wanting to hear their favorite tunes played. Special recognition was given to all the veterans present in honor of Memorial Day prior to picking the winning ticket for the 50/50 to Vic Gillespie.

The OD Shag Club held our annual Spring Clean Sweep on Saturday, May 5th, also known as Cinco de Mayo.  We had 30 members turn out who enjoyed juice, coffee, fellowship, biscuits and donut holes before we hit the streets and the beach.  We picked up 25 bags of trash.  We noticed that the City of North Myrtle Beach is doing a real good job of keeping the streets and beach clean because there was not as much litter on the streets and beach as we have found in the past.

I would like to give a big Thank You to my beautiful wife, Joan, the Clean Sweep Chairperson, and everyone else who turned out to make this Clean Sweep a big success.  We hope to see even more of you for our Fall Clean Sweep which is tentatively scheduled for September 29th. 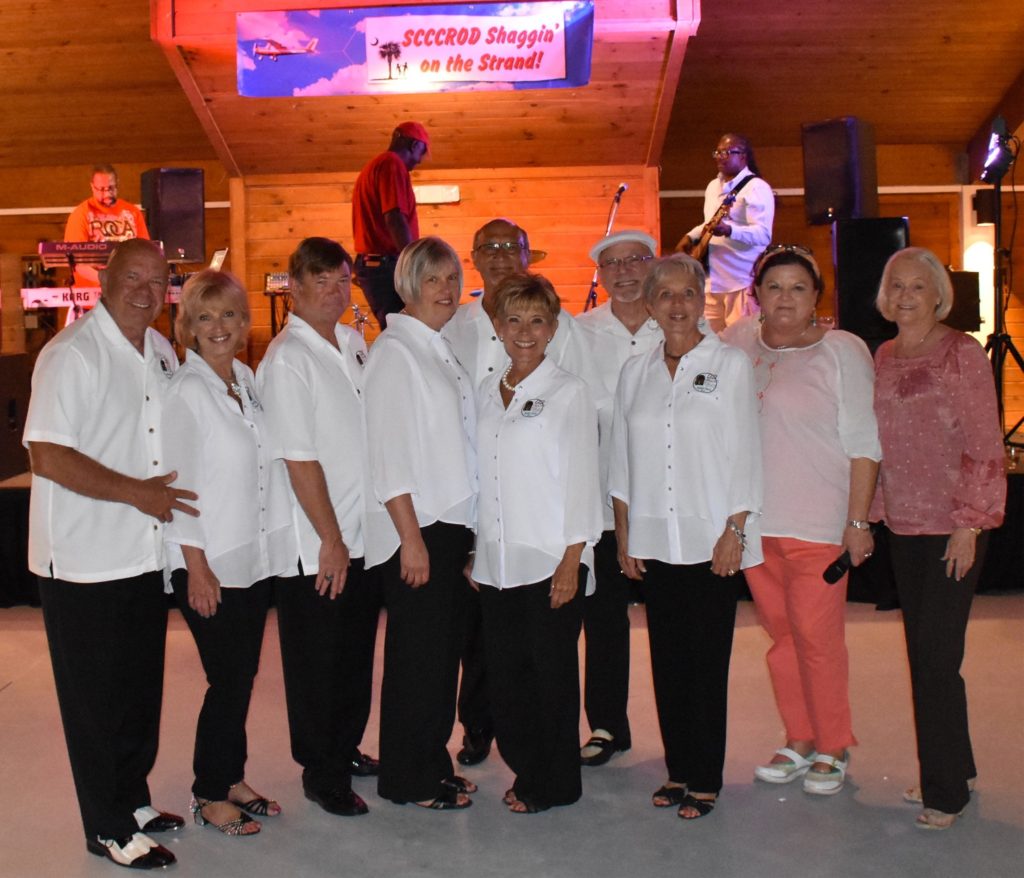 On May 2, 2018 the OD Shag Club Dance Team was invited to the Clerk of Courts of South Carolina Conference at Kingston Plantation from 6:30PM to 8:30PM.

We were contacted by Dot Smith for this event for Cheryl Graham of Dorchester County of South Carolina. There were 2 clerks from the 46 counties of South Carolina representing their county present. A few clerks already knew how to shag so this group was not new to the dance.

We arrived around 6:30PM and were invited to have dinner. After we ate, Linda Campbell our spokesperson was introduced by Dot Smith along with Cheryl Graham. Linda gave a brief history of the shag dance and then introduced the members of our team.

Each team couple danced for our minute and a half to demonstrate the different styles of our team. Our team does not choreograph or dance as a team but show case steps that the non shaggers will not be intimidated by more advance steps. We want non shaggers to feel comfortable getting up and trying to learn.

This was a very enthusiastic group. We were able to get approximately 30 clerks onto the dance floor. They were quick learners. After about 5-7 minutes of instructions, we taught them to dance to music. There was a lot of discussion as to what else we could teach them.

This was a fun group to work with. After the instructions each member of the team danced with the future shaggers of the Clerk of Courts. A follow up call to Dot Smith was very positive. She said that they had a wonderful time and stayed after to dance to the band. She didn’t know if they were shagging but they were having a great time.

Thank you, Dot Smith and Cheryl Graham Clerk of Courts for inviting us to your conference. 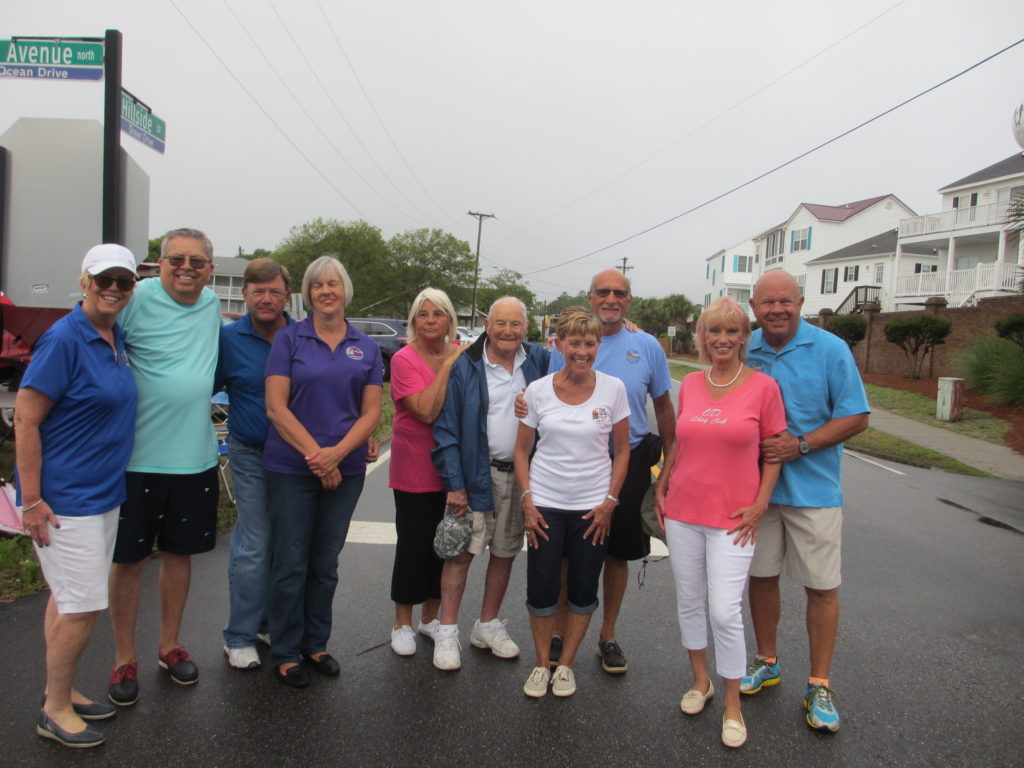 Yes, it was raining when we got there and it was a wet morning at 6AM on Sunday May 6, 2018, for the Divas Marathon in North Myrtle Beach, but the enthusiasm of the runners and the joy that they showed the ODSC Dance Team was well worth being there.

We arrived around 6:15AM to set up the sound system in the rain. We had to set up in the back of Lou’s car with umbrellas to try to keep dry. When all of a sudden, Bill Millman brings a large beach umbrella so we moved under the beach umbrella to set up.

Around 7AM the rain became a drizzle and by 7:30AM the rain stopped. It was a little wet and damp, but it didn’t keep these runners from running. This was one of the largest marathons the Divas have run. There were all kinds and types of tutus and outfits.

We stood along the sidelines and encouraged the runners and danced around 15-minute intervals. This year there were so many runners. They just kept coming and coming. Most of the runners gave the dance team high fives as they ran along our area. They really enjoyed the music as Lou played “Pump up the Jam” and upbeat Shag music.

This year even the spectators got into the music “YMCA”, “Chicken Dance” and of course more Shag music. But it was all about the runners and how they enjoyed this run. One by stander was so impressed with the enthusiasm of the dance team that as the Race Director in Sunset Beach he invited the ODSC Dance Team to perform at their race in two weeks.

And then there is Lenny, our own dance team member, who just had to dance with as many runners as he could (see the pictures on the website). Your president, also got into it, with other spectators doing the electric slide and even the chicken dance with a young’n.

Across the street others were showing their moves. It wasn’t shagging, but they were having a large time. Even Mary Poppins showed up. Like one runner showed his sign “Sexy is as Sexy Does Run Baby Run”. There was such a variety of happenings going on.

This was a very fun event. I would like to thank Katherine Stimson Events for having the ODSC Dance Team at this event. Hope to see them all next year.