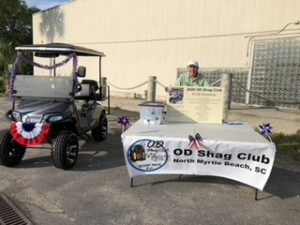 As you know, all of our selling events this year have been cancelled. We lost St. Patricks’ Day, SOS, SOS Parade, and MayFest, not to mention some smaller events.  This Covid Virus really has a way of trickling down, and we saw it firsthand.  Last year at this time, we were completely sold out.  With restrictions loosening up, we thought we may have a selling opportunity at Graham’s Golf Cart store on Memorial Day weekend.  This is like ‘fishing where the fish are’ because we know everyone that walks by, loves to drive golf carts around town.

A big shout out to Mike Graham for allowing us to set up our booth in front of his store on Friday and Saturday.  Also thank you to Rip-Tide Radio for giving us on-air mentions both days, they did a great job.  As always, thank you Monica Powell for the terrific communication. Thank you to our members, Maxie Brien, Dolly McDermott, Kay and Mark Hughes and our new member Tim Pittman, who volunteered their time to sell tickets.  Thank you to all our club members who stopped by to purchase tickets.

Okay, so you want to know the results?  Our two-day event ranked 2nd to our largest event ever (St. Patrick’s Day Festival last year). WE SOLD ALMOST 600 TICKETS!

All that being said, we are still far behind our sales goal.

We have 1,700 tickets left to sell, so we’re always looking for selling opportunities. If anyone would like a block of 10 or more tickets to sell to friends and neighbors, please let Monica Palmieri know by clicking on this link monicapalmieri@me.com. While we did not have the large crowds like the above events, our hit-rate made a hot couple of days well worth our time.

Once again, a great big  ‘THANK YOU’ to all who came out. 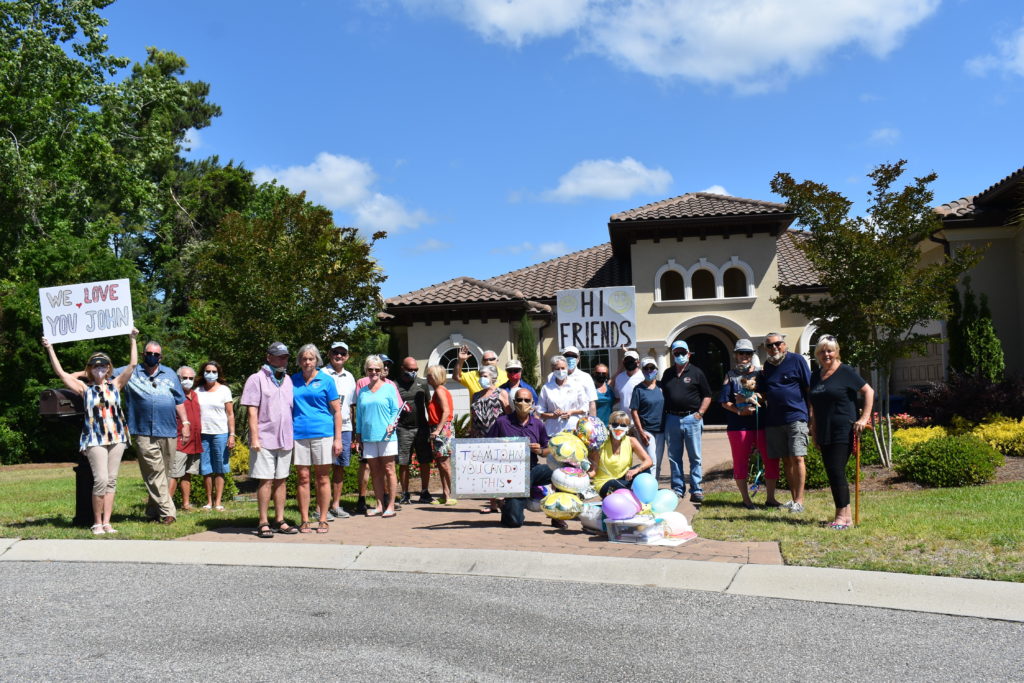 There were just a few clouds in a perfect Carolina Blue sky that set the stage for the most important dance event that the OD Shag Club Dance Team has had thus far for 2020.  Saturday, May 16, 2020, at 10:30 Lou Martino and Linda Campbell organized a surprise “Drive-by” for one of our very own, John and Lori Setzer. Drive-by’s seem to be the new way to “visit” now days due to the “invisible enemy” as it is called, the Corona Virus or COVID-19.

John had been home for two days from Grand Strand Regional Hospital where he had surgery to stabilize his neck.

The cul de sac at Ridgewood Dr North Myrtle Beach began to line up with all kinds of vehicles and most people were getting out of them sporting their fashionable masks.  There were many convertibles, golf carts, and even a beautiful classic muscle car.   The vehicles were decorated with colorful balloons and signs, some saying things such as…”Hugs and Prayers”, We are here for you!” and “TEAM JOHN!”.  As the caravan paraded in front of John and Lori’s house. Even SEA DOO, the Shag Monkey stuck his head out and waved to John and Lori as he passed by John and Lori’s beautiful home.

The caravan of vehicles then stopped in the cul de sac in front of John and Lori’s home and more pictures were taken, some surprises were given to them, and then everyone turned their radio stations in their cars to 94.9 The Surf and they danced in honor of TEAM JOHN to a shag song.

Air hugs and kisses were blown to John and Lori and lots of “Love ya”, “Praying for you guys”, and “ We are here for You!” was heard as we all said our good bye’s from the roadside knowing how much we really wanted to do a group hug but we knew what we felt was that we RECEIVED so much more by what we were experiencing by being there with John and Lori.  However, hopefully they knew that they were being lifted up in much LOVE, FAITH, HOPE and PRAYER!

MANY THANKS goes to those who took time out of their Saturday morning to participate with us: Lou Martino and Linda Campbell, Bill and Diane Millman, Mark and Kay Hughes (and Sea Doo), Barbara Hopper, Barry and Julie Dyer, Lynn and Andy Gabriel, Cathy and Rich Jamiolkowski, Ted Sobol and Callie White, Donna and Burnie Williams, Barnie Lee and Connie Williams, Connie and Jim Livingston and Lou and Dicky Garrenton and we cant forget their neighbor Steve, who kept riding up and down the road in his black corvette .