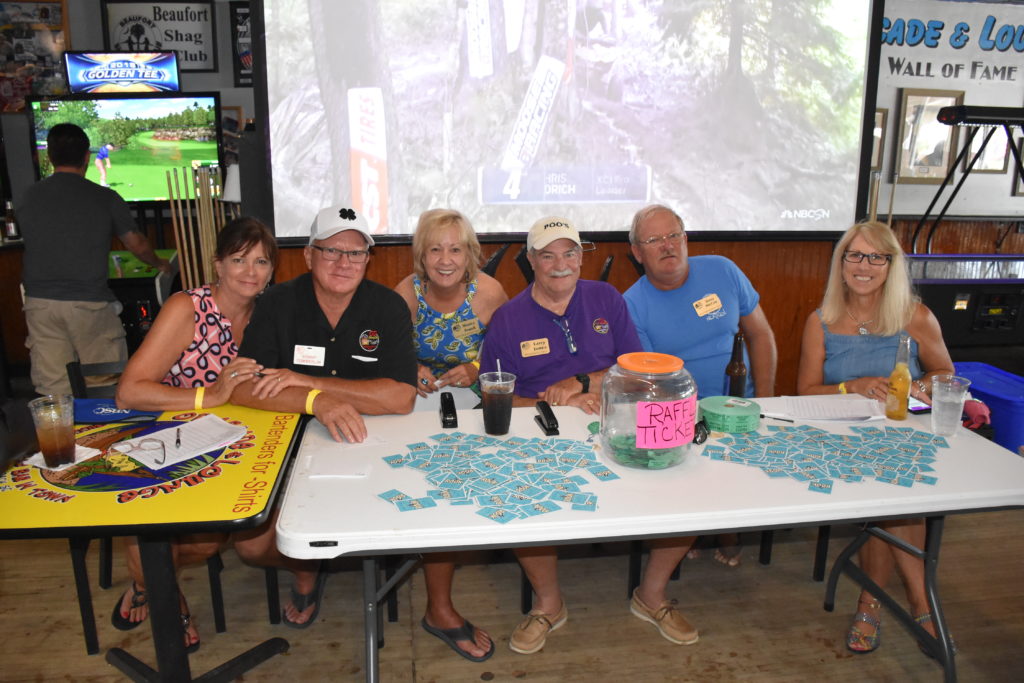 Saturday July 28ththe ODSC hosted the annual Charity Fun Run and thankfully under sunny skies. Although the forecast had been predicting rain and thunderstorms, the weather proved to be perfect for the participants who showed up in a multitude of golf carts and cars.

The day began at the OD Arcade where 162 registered and 145 signed up to take their chance at winning one of the many prizes handed out throughout the afternoon and early evening. The next stop on the schedule was Castaways, where under bright sunshine we enjoyed cold drinks by the ocean, raffled prizes and began to see how our card hand was going to take shape…high, low or like mine, somewhere in between.  After Castaways the cool air conditioning at 710 was a welcome relief as we drew another card and once again handed out more raffle prizes.  From there it was on to Duck’s where more cold beverages were consumed and many of us realized it was past time to purchase a mulligan and get rid of that troublesome card that was hurting our chances of competing for the big prize money.  Once the raffle prizes were given out we trekked across the street to Fat Harold’s to complete the final leg of our Fun Run.

This final stop is where many made the decision to purchase another mulligan or two to get rid of card/cards they felt were hurting their chance at the grand prizes. For several this was a gut wrenching decision. I say gut wrenching because for the first time in the history of this event we had a tie for the highest AND for the lowest hand.  The players in the running knew they were close in score to another player, because you know word gets around, so when they decided to purchase a mulligan they were very aware that the card they drew could mean the difference in winning and losing.  There was lots of shuffling and sliding cards around to draw that special card!

So while totaling the scores, the tension mounted and the end result was that Bob Lucas and Jeff James were tied at 59 for the Highest Hand. In true competitive fashion they decided rather than split the prize they would draw one more card and whoever drew the highest card would be declared the winner.  Sooo, after one more “gut wrenching” draw, Bob Lucas walked away with the $500 prize and Jeff James took home the 2ndHighest Hand prize of $300.  For the Lowest Hand Becki Roberts and Bob Miller, who happen to be friends, were tied at 7.  They decided to split the prize and both took home $100.  What an exciting finish to such a fun day of competition!!!  And you know what…these winners weren’t even the ones who took home the most money.  That honor went to Terry McCoy who won the 50/50 drawing. He walked away with $568!!!  Wow what a jackpot!

HUGE thanks go to Wendy Schultz and Monica Powell co-chairs of this event, whose careful planning and hard work were paramount in the success of this fundraiser.  As with any project, the success depends on not only the leaders but the team who help carry out the leader’s mission, so thanks to everyone who helped in any way.  I’m not going to name names because I’m sure I would leave someone out.  You know who you are so pat yourself on the back and take pride in knowing you contributed in making this fun filled event a big success. Your willingness to help is greatly appreciated!

As mentioned several times above we did hand out raffle prizes at each location.  Our sincere thanks go to Allstate, Grahams Golf Cars, Synovus Bank, Karen and Rich Young, Nancy Sook, the ODSC Ways and Means Committee, OD Arcade, Castaways, 710, Duck’s and Fat Harold’s for their generous donations of items to raffle.  In addition to items from these contributors we also raffled prizes of $20 and $40 at each stop along our way.

While there were many winners throughout the day the biggest winner of all was of course this year’s charity, the Junior Shagger Dance Team (a 501c3 organization.) They will use these monies to help with costs they incur during their travels to various competitions and exhibitions.  As an organization whose purpose is to help promote and preserve the Shag, the OD Shag Club should be very proud to be able to help the future generation do exactly that!

Congratulations to all the winners!

Thanks to all who worked so hard!

Special thanks everyone who participated!

Until next year when hopefully I will have better luck of the draw! 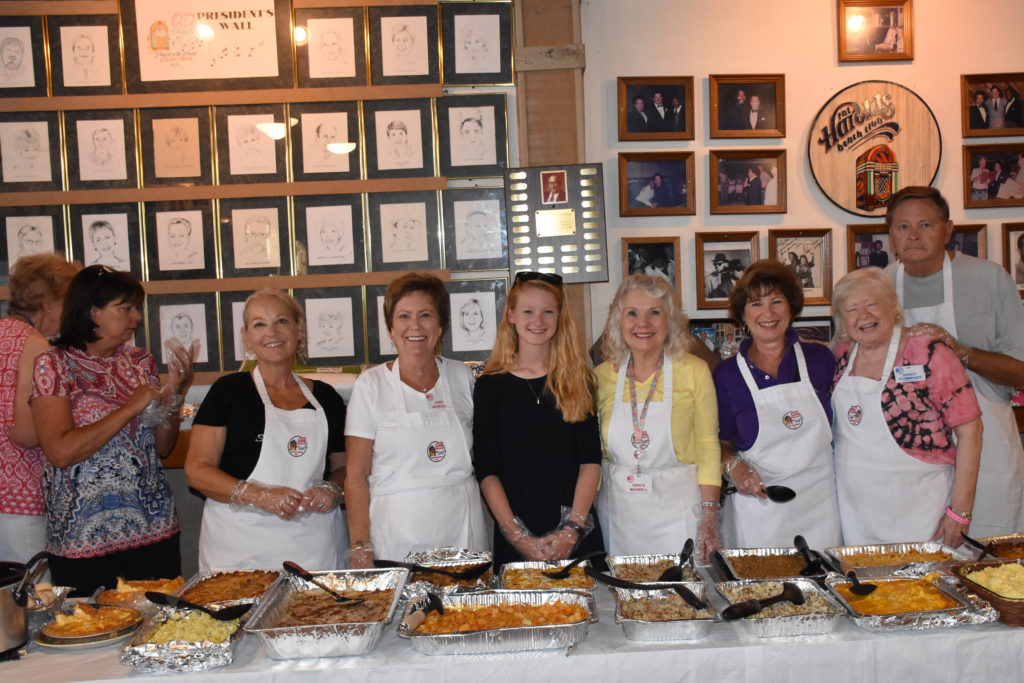 Afterwards, the Junior Shaggers, their parents, and members of our club who were there, went into the main room of Fat Harold’s for a Gospel Hour where we listened to some great live gospel music sung by beautiful young ladies who are Junior Shaggers, and to an “Awesome” sermon given by Ken Jones, a part-time DJ at Fat Harold’s who hails from Maple Hill up in Pender County, NC.

Thank you to all the members of our club who brought food and or helped out in some way to make this event a great success!  Remember, the Junior Shaggers are the future of our club and the future of the shag dance as well! 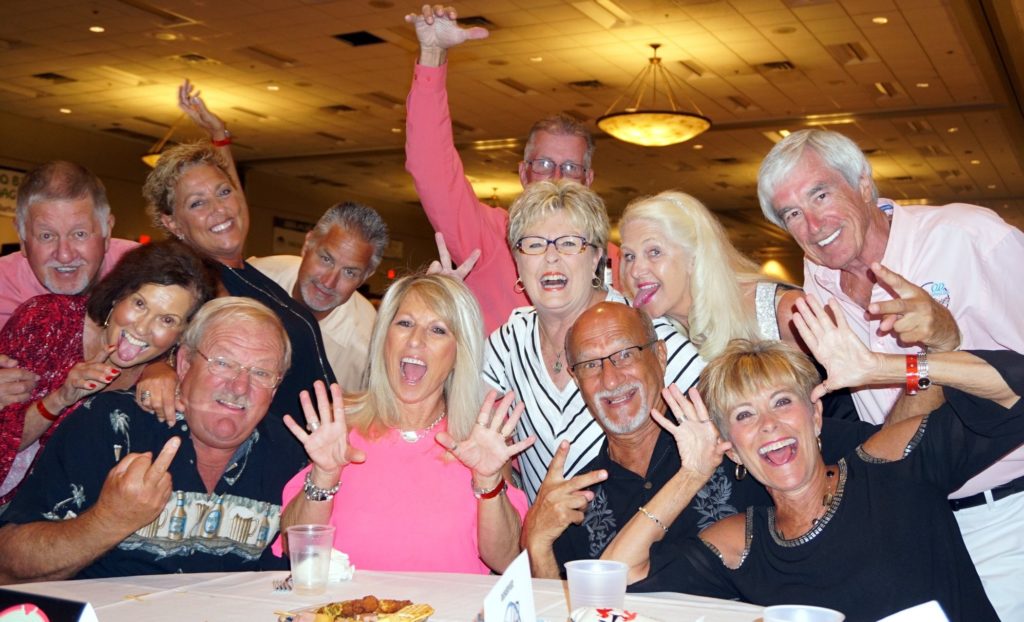 Everyone began arriving to Durham NC for the ACSC Summer Workshop to be held July 13‐15 at the Sheraton Imperial Hotel. There was lots of excitement and activity everywhere. People were trying to check in, somewhere sitting in the lobby waiting to check in while others were having a blast in the Hospitality Room. While in the Hospitality Room, one was offered drinks, beer and wine along with some fun games to play. While playing games such as “Party Plinko”, “Lucky Casino Blackjack”, “Party Pong”, and “The Captains Table”, when you won you were given tickets so you could put them in several give-­‐away baskets of your choice.

Later that night, in the Imperial Ballroom Chigger Woods DJ’d our favorite tunes prior to The Magnificent Band coming on the play until midnight. For those who wanting to dance to the fantastic music of old shag, Betty Brown, was playing in the Empire Room.

Saturday began with a fantastic buffet breakfast for everyone. Officers and others headed to the ACSC meeting while guests and families headed to the pool for a wonderful pool party. After the ACSC meeting, those in the meeting joined the fun for a great afternoon around the pool. There were all kinds of fun activities going on inside and outside the pool from “riding chickens”to a“wet t‐shirt” contest (not with women but with men).

Later that evening there was a Captains Reception and two wonderful DJs with Chigger Woods and Buck Crumpton playing till way in the night.

After another wonderful buffet breakfast Sunday morning, goodbyes were said to each other and everyone looks forward to the upcoming Fall Migration. 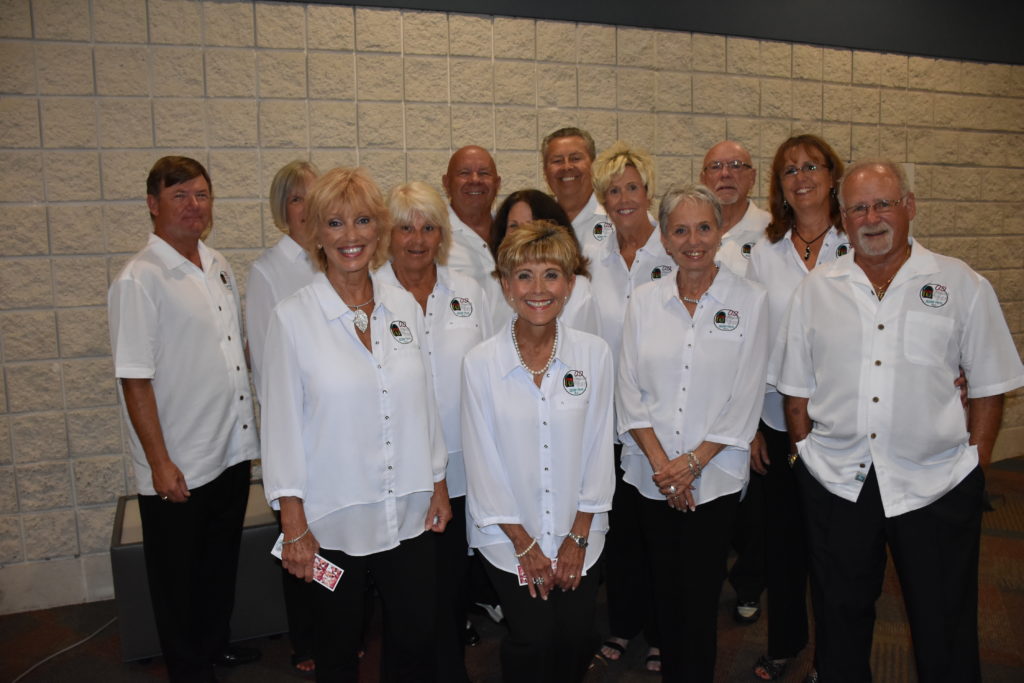 On June 08, 2018 the OD Shag Club Dance Team was invited to dance for the National DayliliesConvention at the Myrtle Beach Convention Center from 6:30-­‐8:30pm.

As the team arrived to dance, there were lots of activities going on for those attending the convention from displays of Daylilies, to Photo Ops along with funny props and of course their dinner and awards banquet.

The dance team arrived on stage to entertain almost 600 plus attendees between their dinner and awards. As we began our demonstration, there was a new “music technician” at the helm, as John Setzer was filling in for Lou Martino, who unfortunately was in the hospital and couldn’t be with us. He was truly missed that night. However, John did a fantastic job!